Newcastle in talks with Dubravka 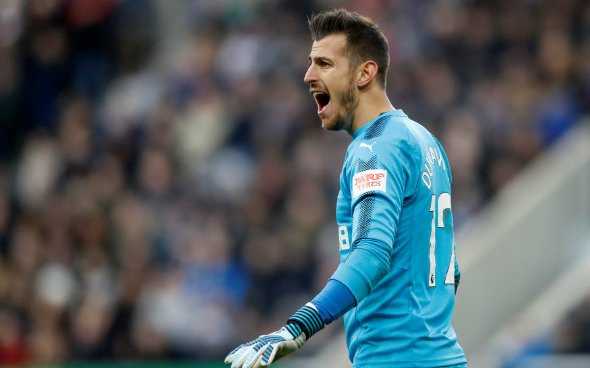 Newcastle United have entered talks with Sparta Prague about signing goalkeeper Martin Dubravka on a permanent basis, according to the Shields Gazette.

The regional newspaper claims that the Magpies have the option in his clause to turn a loan deal into a full-time one for £3.5million.

It is understood that Rafael Benitez’s side are now in negotiations over him and have lined up a four-year deal for the 29-year-old at St James’ Park.

Dubravka has previously revealed he is keen to prolong his stay in the Premier League and he has enjoyed a successful spell in England.

“I really hope I get to stay longer than six months, it’s a huge opportunity for my life,” he said when he first joined the club.

Dubravka’s arrival at Newcastle was one of the turning points in the season and he played a major role in keeping them in the Premier League.

The 6ft 3in colossus has proven himself to be a top goalkeeper and he kept four clean sheets in 12 appearances.

He is an excellent shot-stopper and has a physical presence that has seen him lead the defence well.

Newcastle would be crazy not to snap up the Slovakia international on a permanent basis and will be getting a bargain price for him.

Nothing but Newcastle rating:   9/10

This deal seems like a no-brainer for all parties and it seems highly likely that Newcastle will wrap up Dubravka as their first summer signing.

Nothing but Newcastle rating: 9/10