Lascelles’ loss would be devastating but more so for Lejeune 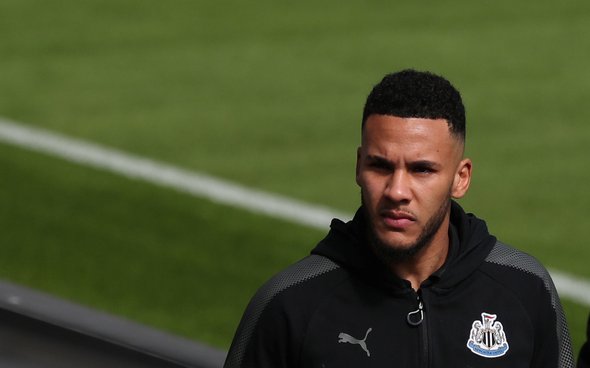 Jamaal Lascelles would be a huge loss to Newcastle United if he left the club but it would be teammate Florian Lejeune that would suffer the most.

The Mirror previously reported that Everton were lining up a £25million move for the 24-year-old Magpies defender, with Tottenham and Chelsea also keen on acquiring his services.

While Lascelles, who will clearly be hot property this summer, is unlikely to leave St James’ Park, the mere idea of him departing the club should not just worry supporters, but cause fellow centre-back Lejeune to be wary.

The Magpies paid £8.7million, according to Sky Sports, to sign Lejeune from La Liga’s Eibar last summer and the 26-year-old has had a successful first campaign at the club.

Lejeune’s submitted stellar performances in the majority of the 26 appearances he made in his debut season, and while he may have flew under the radar because of Lascelles’ eye-catching displays, there’s no denying his signing has been a success.

The only time the arrival of the 26-year-old looked like a mistake was when he featured without Lascelles by his side.

There was a period of four games starting with the Magpies’ game against Manchester United in November where Lascelles was unavailable due to a knee injury, and this left Lejeune without his usual defensive partner.

In Lascelles’ absence, the 26-year-old put in his worst performances of the season and looked rather shaky instead of being a rock at the back.

However as soon as the Magpies skipper was fit again to partner Lejeune, the summer signing was back to firing on all cylinders and keeping his side’s opposition at bay.

Therefore if the Magpies somehow manage to wrongly let Lascelles depart the club anytime soon, it will have an unthinkable negative effect on Lejeune.

This all means that while Lascelles will be a huge loss to Rafa Benitez’s side, it is Lejeune who will suffer the most as he looks unable to flourish at the club with anyone else as his defensive partner based on his displays so far.