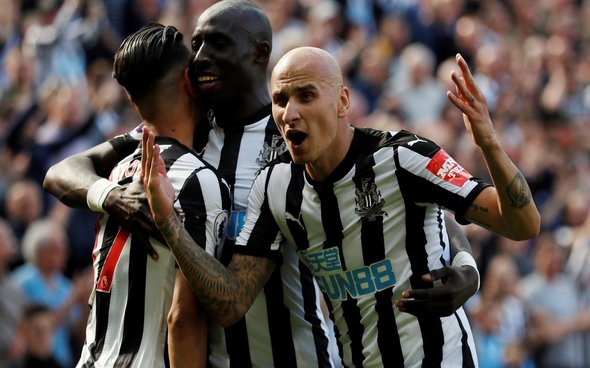 Sean Dyche heaped praise on Newcastle United midfielder Jonjo Shelvey for his passing but admitted that Rafa Benitez dropping him earlier in the season could have cost him a place at the World Cup.

The Burnley boss weighed in on the debate about whether the Magpies 26-year-old, who earns £90,000-a-week as reported by The Sun, should have been named in Gareth Southgate’s England squad for the upcoming World Cup in Russia.

Dyche supplied a surprise reason for the midfielder’s snub by suggesting that Southgate’s trust of Benitez had caused Shelvey to miss out this summer.

“I think the thing with Shelvey is, you got to remember Rafa knows his stuff,” said Dyche on BBC One’s Football Focus (Saturday, 14:43).

“And he (Shelvey) wasn’t first pick all season, in and out a little bit, still got fantastic passing range but I think it’s a tough one (England omission) maybe not quite made it on the fact he trusts the manager who’s not picking him if you like.”

Dyche did a wonderful job with Burnley in the recently concluded season, but his opinion about Shelvey missing out is baffling. Benitez has put his full trust in the midfielder since the turn of the year and seems to no longer have any doubts about his ability. So for Dyche to even inadvertently imply that Benitez’s use of Shelvey this season has affected Southgate’s thinking is a surprise. The 26-year-old wowed Magpies supporters in the majority of the 33 games he played in his latest campaign and few would have suggested that Benitez lacked any faith in the midfielder’s ability. In fact Benitez publicly backed the midfielder to be picked for the World Cup, as reported by the Chronicle, so if Southgate valued Benitez’s opinion that much, he would have  named him in his squad. Therefore while the Burnley boss is right to drool over Shelvey’s passing, he is clearly off the mark with his assessment of why England opted to snub the midfielder by leaving him at home.