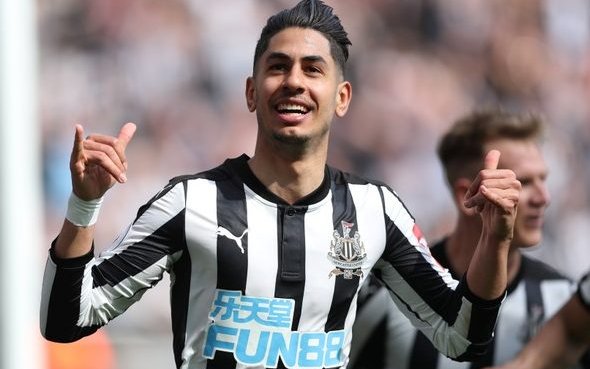 There was an irregular, if not, satisfying kismet attached to Newcastle’s winning strike at Leicester two weeks ago, scored by a player whose career sunk to its nadir against the same opponents at St James’ Park in December.

It was at the King Power Stadium where Ayoze Perez found his redemption, 119 days after a naive albeit well-intentioned effort to lend a defensive hand to his team-mates as they strove to repel a fearsome Leicester counter-attack that resulted in a damaging own-goal, gifting the visitors a 3-2 victory that condemned United to a seventh game without a win and marked the lowest point of his career in black and white to date.

That despairing moment, when Perez poked the ball over the line of the goal he endeavoured to protect, characterised the first half of his season, a woeful collection of bad decision making and fractured confidence amid regular vilification from supporters who began to question if his persistent selection was down to nepotism on the part of Rafa Benitez.

Contrast all of that with the finish he produced in the reverse fixture in early April, a goal encompassing the hallmarks we’ve come to associate with Perez; selfless running, chasing lost causes and momentary flashes of brilliance, and you can see why the moment carried added significance.

Pursuing a ball thumped up-field by Florian Lejeune, Perez accelerated away from the bewildered Wes Morgan and Harry Maguire before dispatching a half-volley over a stranded Kasper Schmeichel from 25-yards to win the game for Newcastle with 15 minutes remaining, a third successive victory in a row at the time and the second time in as many weeks that he was a match-winner.

The flawless execution was one thing, but the audacity displayed by Perez to strike a bouncing ball first time without breaking stride knowing the ramifications of a miss depicts a player whose rehabilitated confidence has imbued him with a sense of belief and self-assurance, distinguishing traits that are symbolic of the improvement experienced by Newcastle as a whole in 2018.

That strike was the middle goal in a three-match scoring run, the latest of which was the equaliser in a 2-1 win over Arsenal last Sunday, that has been indicative of Perez’s improved form.

His effect on games is becoming increasingly positive, marrying that commendable work ethic with telling contributions in crucial games, those decisive goals against Huddersfield and Leicester both pertinent examples. His record in the last seven matches is three goals and four assists.

It’s a credit to Benitez and his work on the training field to eradicate the immature aspects of his play, the frustrating tunnel-vision and selfishness that saw him border on being a slight hinderance to the team, that Perez is now performing with greater maturity and awareness than ever before. For the first time, he’s actually playing with his head up.

Now we’re seeing an incisive and perceptive Perez, his movements are sharper and more calculated, illustrated by the goal against Arsenal where stealthily nipped in ahead of Shkodran Mustafi to guide Deandre Yedlin’s cross in at the near post, another instinctive one-touch finish.

His deliverance has been a long-time coming, but we’re finally seeing the better aspects of his play channelled correctly and used productively to the benefit of the team, and the way Perez has steadily grown grown in influence and confidence since that dark day in December is symptomatic of the manner in which Newcastle have fought to survive this season.

He and rest of his team-mates are now fully redeemed.