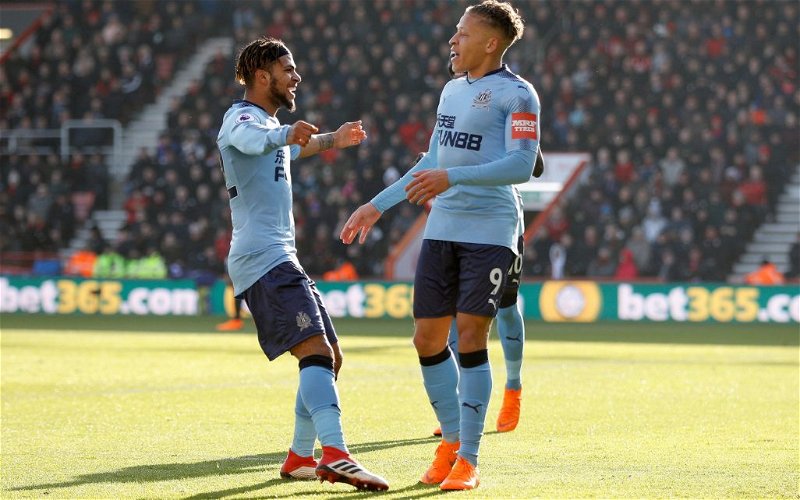 This was always going to be a difficult season for Dwight Gayle – a striker fabled as ‘too good for the Championship’ but ‘not quite good enough for the Premier League’.

An unwanted reputation perhaps for any player harbouring an ambition to carve out a successful and prolonged career in the top-flight, but Gayle has done little this season to convince his detractors that he is potent enough to score consistently enough at this level.

His goal return in three seasons at Crystal Palace – 15 in 64 league games, the majority of which were as a substitute – was modest but impressive in the circumstances, while 23 goals in the Championship last term, despite persistent absences due to a recurring hamstring injury, was a major factor in Newcastle returning to the Premier League as champions.

The unerring regularity at which Gayle found the net earned him the right to keep possession of the famous number nine shirt and begin the campaign as United’s first-choice striker, but only five goals have arrived in his 28 appearances cementing those reservations concerning his suitability.

And although not a direct factor, Newcastle have suffered the consequences of his negative transformation from predatory to profligate, a catalogue of missed chances proving detrimental in the battle to stave off the threat of relegation at the tail end of 2017.

Only recently has Rafa Benitez managed to masterfully cushion the impact of Gayle’s consistent wastefulness, making subtle tweaks to his system to encourage players in other areas of the pitch to contribute more goals on a regular basis and instigate a revival this calendar year that has put United on the brink of survival.

Gayle’s rough transition back into the Premier League coupled with a paltry goal return, contrasted enormously by a tireless work ethic that has endeared him to the Magpies fans, will undoubtedly still pose a significant concern for Benitez.

Efforts to refresh his attacking options will be at the forefront of his recruitment agenda this coming summer, and Gayle hasn’t exactly made a compelling case for Benitez to keep him at St James’ Park in recent games.

Two goals at Bournemouth in February hinted at a possible turnaround, but he hasn’t scored since and his performance in the 1-0 home win over Huddersfield last Saturday highlighted Gayle’s limitations at Premier League level, squandering four opportunities that a seasoned top-flight goalscorer would have easily converted.

What is obvious is that that Gayle is suffering from a crisis of confidence that is proving hindrance to him, and what striker worth their salt wouldn’t question their own ability in his predicament, but Newcastle can’t afford to wait for the 28-year-old to rediscover the belief that fuelled his goalscoring exploits last season.

On the other hand, it is a positive that Gayle continues to put himself into goalscoring positions but his unreliable finishing, a fundamental skill for a striker, is an issue, and Benitez will be acutely aware that Newcastle require higher calibre striker with greater accuracy and precision in the penalty area.

Goals are ultimately Gayle’s currency but, unfortunately, he hasn’t cashed in enough to prove himself ‘good enough for the Premier League’.

It’s for that reason that Benitez should ultimately cash in on a forward whose qualities are better suited to the Championship and invest in a striker that can provide the goals to propel Newcastle forward towards the next stage in the Spaniard’s long-term project.